John Wesley attended Oxford, entering in 1720. He eventually began leading a group his brother Charles had organized. The small groups regular meetings earned them nicknames such as Bible Moths and Methodists.

Wesley was educated at Charterhouse School in London and was nominated by his schoolmaster for an exhibition to Christ Church, Oxford to which he was admitted as a commoner in 1720. He studied classics and logic and very much enjoyed ‘Oxford Life’ frequenting coffee houses, playing cards and making excursions up the river. It was at Oxford that he started to keep a diary, an old red note book in which he would sometimes write in code (only accurately and fully deciphered in 1972).

After completing his BA, Wesley followed the traditions of his family by taking Holy Orders and was made a deacon in Christ Church Cathedral in September 1725. Three years later he was ordained.

In 1726 a vacancy became available for a Fellowship at Lincoln College, which at that time was open only to those born in the diocese of Lincoln. Wesley’s father had connections with Dr Morley, Rector of Lincoln College, and after being examined in Homer and Horace he was duly elected to a fellowship on March 25th.

The United Methodist website offers a history of the denomination in the U.S. that dates back to 1736 when the Wesley brothers arrived in Savannah, Georgia as missionaries to the British colony.

Both John and Charles were Church of England missionaries to the colony of Georgia, arriving in March 1736. It was their only occasion to visit America. Their mission was far from an unqualified success, and both returned to England disillusioned and discouraged, Charles in December 1736, and John in February 1738.

The UMC history Who We Are traces the denomination through seven stages up to the present day.

When was Methodism founded?

Methodism began in Britain due to the activities of John and Charles Wesley. The Methodist Episcopal Church in the United States was founded in December 1784 at a meeting in Baltimore, MD known as the “Christmas Conference.” For more on the story, see http://archives.umc.org/interior.asp?mid=258&GID=216&GMOD=VWD&GCAT=C.

You can find the FAQ at

The history was originally published in a printed limited edition, illustrated from the holdings of the Archives and History Center of The United Methodist Church, which had officially opened its new quarters on the Drew University campus in October, 1982. In preparing the electronic version, the page formatting was kept simple, the uncrowded layout makes the book a pleasure to read. You can click through on the images to a higher resolution copy. 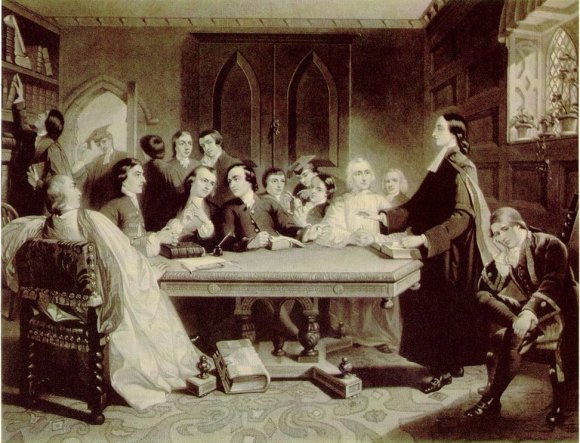 The MethLibrarian Blog has an article on The First Methodist Parsonage in the United States.

“The controversy as to which was the first Methodist church in America we will leave to those who claim priority for the old John Street Church, New York, and those who enter a counter claim on behalf of the Strawbridge log meetinghouse in Maryland. While these warring advocates are pitting Asbury against Lee and Lee against Asbury — marshaling supposition against supposition and document against document — let us turn to an interesting item of Methodist history, about which there is no such perplexing surmise.

There can be no doubt that the little, old-fashioned, Dutch-built house which stood on a lot adjoining the John Street Church, New York City, was the first Methodist parsonage in America.

Drew University Library has been digitizing its collection of Methodist images.

The staff of the Drew University Methodist Library has been digitizing several thousand folders of archived images to Flickr. The images date from the 18th century to the present and include a variety of persons affiliated with the global Methodist tradition. Pictures include educators, missionaries, ministers, and social justice advocates. Most of the images highlight individuals from the United Methodist Church tradition but many evidence individuals from lesser known Methodist-related denominations.

It has a flicker site available at

The United Methodist General Board of Global Ministries offers a number of primary and secondary Wesley documents online. GBGM provides a library of public domain Wesley images at the site, too.

The documents include 141 sermons, A Short History of Methodism, Questions and Answers about Christian Perfection and Collection of Hymns.

We invite you to: Deepen your Christian walk in word and deed; Follow John Wesley’s disciplines of prayer, Bible study, and fasting; Discover the roots of mission, spirituality, and justice; Act with Wesley on issues of poverty, slavery, substance abuse, education of children, women’s leadership.

Heitzenrater is recognized as the world’s leading authority on John Wesley and early Methodism. His book, Wesley and the People Called Methodists, has been translated into seven languages. He served on the faculty of SMU’s Perkins School of Theology for 16 years and in 2010 retired from the faculty of Duke University Divinity School. He is best known for breaking the secret code of Wesley’s personal diaries, making them available to the world. For his scholarly achievements and his service to SMU, the University conferred upon Heitzenrater the degree of Doctor of Humane Letters, honoris causa.

UM Board of Discipleship video on touring Wesley sites